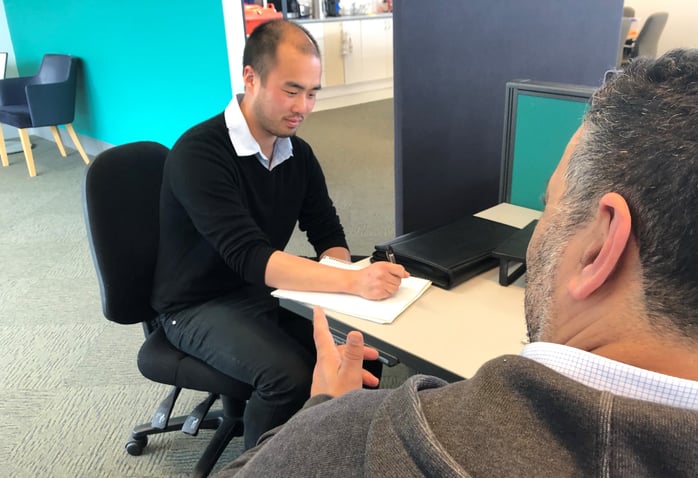 We employ some highly skilled and trained professionals, here at Recovery Partners, but sometimes the most valuable tool in their kit is one they didn’t necessarily learn at university: communication.

Top Suthayakhom, an Occupational Therapist with Recovery Partners, recently engaged with a company and worker who had reached a bit of an impasse. ‘The worker, *Alan, had sustained a shoulder injury at work and undergone surgery, but there was a delay in his return to work,’ Top explains. ‘Although he’d received medical clearance to return to (suitable duties) at work two months earlier, there was a breakdown in communication between Alan and his employer and this had not happened.’

Some workplace conflicts and negative dynamics between Alan and colleagues had contributed to the communication breakdown, Top was informed, but the employers were keen to resolve the situation, as it was costly and unproductive. The employers also understood that returning to work as soon as he was able was in Alan’s best interests, too.

To open up a dialogue, a meeting was arranged between Top, the company’s Return to Work (RTW) Coordinator, Alan and his supervisor. ‘Even though the company had an internal RTW Coordinator, I was asked to assist with this case as it just wasn’t moving forward,’ Top explains. ‘I met with the RTW Coordinator first, to make sure we were on the same page, then we all participated in the site meeting together.’

Although he was aware that the employers felt there were issues with the Alan’s performance and interpersonal skills, it was important that Top not let these affect his interaction with Alan, he says. ‘I look at every case individually, and never try to apply a one-size-fits-all approach. I treat people as I’d like to be treated, professionally and respectfully.’ Sometimes, Top says, the way that return to work meetings unfold is as much about the way parties speak to each other and the frame the situation as it is about the capacities of the worker. Six years of previous experience in a clinical setting enabled Top to learn and apply these effective communication skills.

With the assistance of the employers, Top had come up with some alternative suitable duties that Alan could undertake while still being mindful of the physical limitations he had, and he proposed these to Alan and his supervisor in the meeting. ‘I find it helps to look at the worker’s capacities, rather than restrictions. It’s a more productive approach, and it helps everyone focus on the positives of the situation.’ Alan and his supervisor agreed to the duties Top proposed, and Alan returned to work the following week on his pre-injury hours. ‘The RTW Coordinator and the employer were really happy with this outcome, and I was pleased to be able to help resolve the situation for them,’ says Top.

Thanks for your hard work, Top!

If you’d like some help to facilitate positive return to work outcomes for your business, get in touch with Recovery Partners by emailing admin@rrp.com.au or calling 1300 OHSRTW (647 789) today.